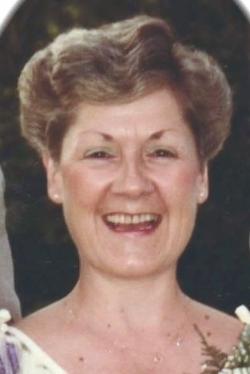 Jessie Ann Grist - age 84, of Kentville, passed away on Saturday, April 27, 2019 in Grand View Manor, Berwick. Born in Pictou County, she was a daughter of the late Charles and Georgina (Cheverie) Fraser. She had been employed with MT&T as an operator, in repair service, an engineering clerk, retiring as a service advisor and was a member of the Telephone Pioneers. She spent the majority of her life in Pictou Landing and in recent years, moved to the Annapolis Valley. She was a loving wife, mother and grandmother who took great pride in her family and maintaining her home. She was well known throughout Pictou County as "The Fudge Lady", always having a supply to offer to those she met. She is survived by her husband, Walter "Walt", Kings Riverside Court, Kentville; son, Shane (Jacqui), Cambridge; two granddaughters, Nicole Grist (Matthew Clarke), Beaver Bank; Kaily Grist (Jalil Chaudry), Vancouver; great-grandchildren, MacKenzie and Logan; two brothers, John (Jeanette), Merigomish; Donald "Din" (Murial), Dartmouth. She was predeceased by sisters, Jean, Margaret and Anita; brothers, Samuel "Sug", Peter, William and Albert. Cremation has taken place. A funeral service, followed by a reception, will be held at 2 pm Wednesday, May 29, in the R.H. Porter Funeral Home, 55 Almont Avenue, New Glasgow, with Mr. Fergie MacKay officiating.The family wishes to express their sincere appreciation to the angels on Winslow Unit and the nurses at Grand View Manor, with special appreciation to "our special angel", Linda Walters-Findlay, for her care, kindness, support and compassion. Donations in her memory may be made to Alzheimer’s Society or Grand View Manor, 110A Commercial St., Berwick, NS, BOP 1EO.