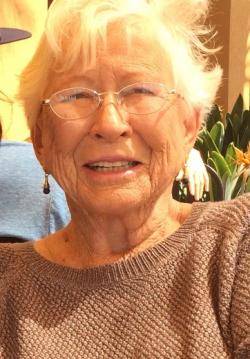 Born and raised in New Glasgow, Nova Scotia as an only child to Alexander and Nettie Fraser MacGillivray, Peggy loved to skate, sing, dance and play the piano every chance she got.

After graduating, she moved to Toronto and became a legal secretary for 3 years in Toronto prior to moving on to Vancouver where she met Gordon Genge, her husband for 25 years. After marriage, they immigrated to the States to live in several New England States for 8 years where their 3 boys were born and raised prior to moving out to Los Angeles where Gordon founded his successful business.

The family moved to a beach home in 1967 and after her children went off to school Peggy’s love for travel took her to more than 100 different countries. She and Gordon separated in 1979 but Peggy stayed in Ventura County area for over 50 years where she passed peacefully surrounded by her family a week after her 95th birthday on July 29, 2019. She is survived by her sons Jeffry Alexander, Christopher Gordon Fraser, and Gregory Paul Genge along with three grandchildren, Gordon Alexander, Baily Michelle and Jeffry Derek Genge who now all reside in California and Mexico.

Peggy was a lot of fun and got to travel the world, but always said she wanted to return to rest in Nova Scotia, joining her mum and dad in Elgin. A graveside service will be held at 3 pm Thursday, August 22, in Elgin Cemetery.