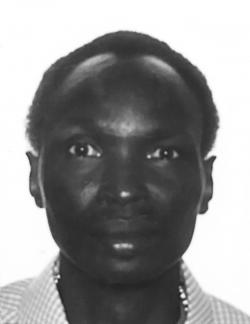 Michael Thiey, New Glasgow, formerly of Sudan. The community surrounding Michael is saddened to announce his death, which occurred on November 23, 2019 in the Palliative Care Unit of the Aberdeen Hospital. He was comforted by the attentiveness of his neighbour, Jane who recognised the seriousness of his medical condition and sought help. In the final days, he received the best care possible.  As a "Lost Boy of Sudan," Michael managed to survive against great odds, and his death is viewed as a tragedy. We anticipate the arrival of his only relative in Canada, a nephew, David, of Calgary, Alberta. Those who knew or cared for Michael are invited to gather at Trinity United Church in New Glasgow, on Wednesday, December 4, at 2pm, under the leadership of Rev. Donna Tourneur. Donations in his memory may be made to "Safe Harbour" c/o Trinity United Church, and will be used to offset expenses associated with his death.