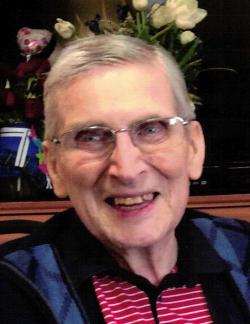 James S. "Jim" MacMillan, age 82, passed away January 10, 2020, at Ivey’s Terrace Nursing Home, Trenton. He was born in New Glasgow to the late Anthony and Winnie (George) MacMillan. Jim was a veteran having spent 5 years in the Navy, and after a year out, he reenlisted in the Air Force for another 5 years. Most of the rest of his working life was spent at Reynolds Aluminum in Ontario. He is survived by sisters, Anita, Janet and Elizabeth; brothers, Eddy (Sandra), Ron (Marlyn), Paul (Rita), and Francis (Shirley); sister-in-law, Becky. Besides his parents, he was predeceased by sisters, Sarah and Mary; brothers, John and Hughie. Arrangements are entrusted to the care of R.H. Porter Funeral Home. Cremation has taken place. Mass of Christian Burial will take place at 11 am Wednesday, January 15, at Saint John the Baptist Roman Catholic Church, New Glasgow, with Fr. Peter MacDonald officiating. Reception to follow at the Trenton Legion, Br. 29. Interment in Christ the King Cemetery at a later date. Donations in his memory may be made to Christ the King Cemetery Fund c/o Saint John’s Parish. The family would like to thank the staff at Ivey’s Terrace Nursing Home for the excellent care Jim received during his time spent there.