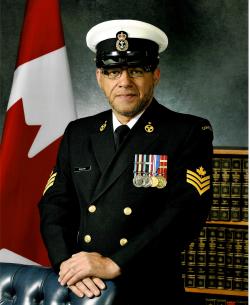 Sherman Wilbert MacLean, age 63 of New Glasgow passed away peacefully with family by his side on Monday, August 24, 2020 at the Aberdeen Hospital, New Glasgow, N.S. Born in New Glasgow, he was a son of the late Alvin Bernard MacLean and Laura Maude (Skinner) MacLean.

Sherman’s service with the Royal Canadian Armed Forces began in 1974. He served on many ships including HMCS Terra Nova which was deployed to the Persian Gulf region in 1990-1991 where HMCS Terra Nova performed escort, patrol and peacekeeping missions. He served on several ships in many capacities in the Navy, including as Recruiting Officer and Master Engineer.

Sherman was the recipient of several honours and awards. He completed 37 years of dedicated service in the Royal Canadian Armed Forces retiring in 2011.

After his retirement, he moved back to his native town of New Glasgow to be closer to his family. Sherman was very dedicated in caring for his ailing mother until her death. He loved family gatherings and especially enjoyed being master chef at all family barbecues. He loved his family and enjoyed a hearty laugh as we all shared stories of growing up together.

Sherman’s passion was working in his vegetable garden and he loved sharing his harvest with the community. He enjoyed carpentry work, working outside and was great at keeping a well-manicured lawn and flower garden which was commented on by many.

He was a faithful member of Second United Baptist Church. He loved his Lord and Saviour and enjoyed discussing the Bible with family members.

He was predeceased by his father, Alvin B. MacLean, and mother, Laura Maude MacLean; brother: Kevin; sisters: Norma Ashe, and Betty Durant.

Visitation will be held on Tuesday, September 1, 2020 from 6-9 pm at R.H. Porter Funeral Home, 55 Almont Ave, New Glasgow. Those attending must wear a mask and practise social distancing. Family funeral service, by invitation only, will be held on Wednesday, September 2, 2020, 2 pm at Second United Baptist Church, 330 Washington St, New Glasgow, NS, officiated by Rev. Dr. Moses B. Adekola. In lieu of flowers, donations may be made to Second United Baptist Church or the Canadian Cancer Society. Many thanks to the doctors and nurses at Aberdeen Hospital for their compassion and care.