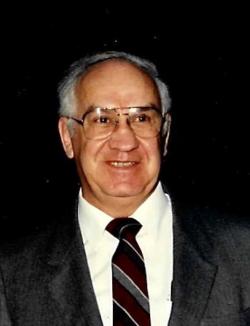 Joseph Aurèle LeBlond, Abercrombie, NS. On August 26, 2020, Joe, age 87, passed away peacefully in the Aberdeen Hospital, New Glasgow, NS. Born in Grand Falls, NB on December 10th, 1932, he was the son of the late Alfred and Anna (Godbout) LeBlond.

He was a former choir member and Eucharistic Minister at Our Lady of Lourdes Roman Catholic Church. He was a member of the Pictou County Parkinson Group and participated annually in the Parkinson SuperWalk. He was also involved with Boy Scouts, Abercrombie Fire Dept Executive, Cursillo Movement.

Dad was happiest to be working in his garage building furniture or repairing anything that needed fixing for anyone. He enjoyed many trips to Grand Falls for family gatherings, the Cape Breton Cabot Trail, a drink of Crown Royal, and sharing his homemade fudge. Joe built his home and many pieces of furniture, including the furniture in the Aberdeen Hospital Chapel. Barb and Joe enjoyed many road trips, including driving across Canada in 1995.

He was diagnosed with Parkinson’s in 2010, but he never complained and kept going.

Visitation will take place from 2-4pm and 6-8pm Friday, September 11, at R.H. Porter Funeral Home, 55 Almont Avenue, New Glasgow.  Those attending must wear a mask and physical distancing must be respected. A private Funeral Mass will be celebrated at Stella Maris Church, Pictou at 11am on Saturday, September 12, Fr. Peter MacDonald officiating. Burial will take place at the Abercombie Cemetery. In lieu of flowers, memorial donations may be made to Parkinson Canada, the Pictou County Food Bank, or a charity of choice.

Upon reaching the Pearly Gates, Dad probably said, "Let me fix that creak, and I’ll add a coat of paint while I’m at it." Bon Voyage, Dad. À bientôt.