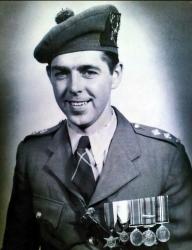 Douglas Arthur Stallard, age 93, of New Glasgow, passed away Thursday, October 1, 2015 in the Aberdeen Hospital, New Glasgow. Born February 14, 1922, in New Glasgow, he was a son of the late Sidney and Annie (Westerman) Stallard. Doug attended the West Side School and New Glasgow High School. In 1937-38, he was a member of 219 Army Cadet Corps. He left school in 1938 to work for Logan’s Dairy and then Eastern Bakeries Ltd. In 1940, he enlisted in the Army and then RCAF aircrew on transfer. He trained first as a wireless operator, then air gunner, had the highest standing in both classes, graduating in July 1941 with the rank of Sergeant. He proceeded overseas in August 1941 and was posted to the newly formed 415 Torpedo-Bomber Squadron as one of the original air-crew draft. He received his Commission in September 1942 and served until 1943. He was posted back to Canada on the West Coast as an instructor and crew member on No. 149 Torpedo-Bomber Squadron. On April 24, 1944, he married Vera G. Rogers. He was posted to Transport Command, returned overseas en-route to Burma. After developing appendicitis, he remained in England until being discharged in 1945 with the rank of Flight Lieutenant.  Following the War, he attended a tutorial at the old Halifax Academy and then enrolled at Dalhousie in the Faculty of Pharmacy, graduating in 1948. He joined D.R. MacLeod Drug Store, later becoming a partner and co-owner. He served 2 terms as President of the N.S. Pharmaceutical Society and was volunteer pharmacist at Glen Haven Manor in early years. Following university, he enlisted in the Pictou Highlanders remaining when the regiment was amalgamated to form the Nova Scotia Highlanders. He remained in various capacities until work commitments necessitated retirement. He was honored to serve as Honorary Lieutenant-Colonel of 1 N.S. Highlanders and later Honorary Colonel of the Regiment. He recently received a coin commemorating the Battle of Britain. Doug served on the Board of Camp Hill, Halifax Infirmary and QEII; was Past President of the City Club of New Glasgow, Festival of the Tartans, St. Andrew’s Society of New Glasgow and Central Nova P.C. Association; Life Member of Clan Donald N.S. and Edinburgh, An Comunn Gaidhlig and Gaelic Society of Cape Breton, Wartime Pilots and Observers Assoc.; member Clan Donald Lands Trust, Albion Lodge No. 5 AF and AM; member Royal Canadian Legion Br. 34, New Glasgow, RCAFA 110 Wing, Stellarton, Air Gunners Assoc., Sea Squatters Club (USA), The Goldfish Club (1942), Brass Pounders League. He was a supporter of all Cadet organizations, the Battle of Normandy Foundation, Conference of Defense Associations and Reserves 2000. He had a keen interest in history. He is survived by a daughter, Valerie; sons: Chuck (Susan), New Glasgow; Dougie, Stewiacke; Don, New Glasgow; grandchildren: Andrew (Marina), Scott, Alexis, Blair and Kristen; brothers: Sidney (Elizabeth), Bermuda; Rev. Ronald (Molly), Lethbridge, AB; sister-in-law, Renate Stallard, Comox, BC; nieces and nephews. He was predeceased by his wife Vera (Rogers) in 2005; sister, Mary; brother, Gordon. Visitation 2-4 and 7-9 pm Saturday in the R.H. Porter Funeral Home, New Glasgow. Funeral service 2 pm Sunday in Little Harbour Presbyterian Church with Rev. Lorne MacLeod officiating. Burial will be in Heatherdale Memorial Gardens. Donations in his memory may be made to Little Harbour Presbyterian Church, VON, Aberdeen Palliative Care Unit, Salvation Army, IWK, St. Vincent DePaul Society, any Cadet Organization or a charity of choice. Royal Canadian Legion Br. 34 will meet at the funeral home at 6:30 pm Saturday to conduct their service.