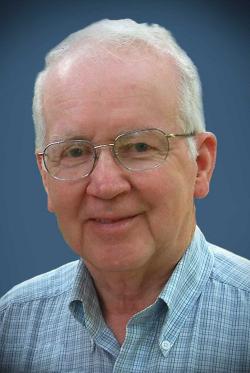 James Roy "Bud" Boone, age 83, of Trenton, passed away Monday, October 19, 2020, at home. Born in New Glasgow, he was a son of the late Percy and Dorothy Boone. He worked as a mechanic at V8 Motors and retired from Nova Scotia Power Trenton Generating Plant in 1994. He served in the Canadian Armed Forces with the RCEME for several years. He was an avid supporter of the Cadet movement. He was an amateur radio operator, VE1VRM; a train lover "no other way to fly except by train"; and was very happy when he got his flying license. He was a member of the Maranatha Bible Church. Bud will be remembered as a kind, generous man who was loved by many. He had the ability to make friends with anyone and would stop and talk for a short or lengthy conversation. He loved country music, was a great fan of Hank Snow and the Gaithers; he played accordion and guitar and in his early years, played in a band. He loved animals, especially his cat "Cuddles". He is survived by his wife, Vivian (Aikens); daughters: Janet, Stellarton; Susan, New Glasgow; son, David, New Glasgow; sister-in-law, Myrna Boone. He was predeceased by his parents, brother, Harold and a sister in infancy. Special thanks to the Weatherbie families and Tee Roberts for their thoughtful acts of kindness. Thanks to Dr. Park, and his receptionist Kathy, for many years of compassion and care; Dr. Kwasnik and the palliative care nurses; VON nurses and homecare. Visitation 1-1:45 pm Friday, in Maranatha Bible Church, 490 Abercrombie Road, New Glasgow, followed by funeral service at 2pm, with Pastor Jerry Stearns officiating. Those attending must wear a mask and practise social distancing. Seating for the funeral is limited and will be on a first come first serve basis. Burial will follow in Hillside Cemetery. Donations in his memory may be made to a charity of choice.  Arrangements are under the direction of R.H. Porter Funeral Home.