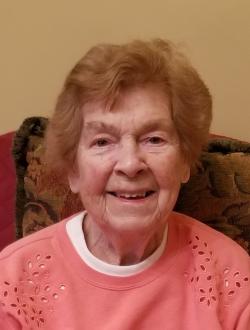 Elsa Loretta (Cahoon) Robertson, passed away peacefully at Glen Haven Manor, New Glasgow, NS on February 19, 2021 at the age of 92. Born at the old Aberdeen Hospital in New Glasgow, she was a daughter of the late Alexander Newton Cahoon and Mary (Brown) Cahoon of Trenton. She was a graduate of Maritime Business College and prior to her retirement, she worked at Nova Scotia Pulp Ltd., the Department of Lands and Forests, Michelin Tire and the Nova Scotia Government. She and her husband traveled to many parts of the world to visit with their children. She was a member of St. John the Baptist Roman Catholic Church located on High Street, New Glasgow. She is survived by her two sons, Bill and Dale; grandson, Derek; and son-in-law, Jim Oldfield. Besides her parents, she was predeceased by her loving husband, John William Robertson on December 1, 2006; her daughter, Joady Anne (Oldfield) on March 19, 2010; her sisters, Rita, Eileen and Edith; and her brothers, Jewel, Art and John. She was the last surviving member of the Cahoon family. Special thanks are extended to the staff at the Restorative Care Unit of the Sutherland Harris Memorial Hospital, Pictou; Glen Haven Manor, New Glasgow; and also to Barbara Scott of Westville, her caregiver and friend of many years. She will be buried at the Holy Cross Cemetery next to her husband and daughter. Funeral arrangements have been entrusted to R.H. Porter Funeral Home, New Glasgow, NS. Donations in her memory may be made to a charity of your choice.