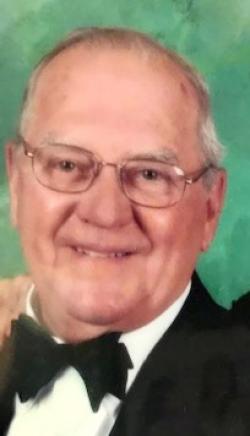 James Wilson Gogan. It is with sadness that the family of James "Jim" Gogan announce his recent passing after a short illness.

Jim was born in Springhill, Nova Scotia to Jean and James Gogan. He was predeceased by his sister Marie and brother Allison.

Jim spent his career with the Empire Company Limited and the Sobey Group of Companies, ultimately retiring as the President and Chief Executive Officer of Empire Company in 1999.  He continued to serve on the board of Empire and a number of other public corporations for several years, including Wajax, Hannaford Brothers, Seamark, Clearwater. He was also a founding director of Nova Scotia Business Inc.  He was fortunate to spend a career doing what he loved.  His passion for the stock market was well known to all who knew him.

After watching his four children all graduate from St Francis Xavier University, Jim developed a special fondness for "X" and all that it offered.  He served multiple terms on the Board of Governors and continued on the University’s Finance Committee for over 15 years.  He enjoyed this time immensely and the friendships that developed at X.  He received an Honorary Degree from the University in 1998.

Jim contributed generously of his time to a number of organizations, including the Gyro Club and United Way of Pictou County.  He was particularly proud of the development of the Aberdeen Hospital Foundation and its endowment fund, an organization which he contributed to for over 35 years.

He was a devout Catholic and a Knight of the Order of Malta.

A private Funeral Mass will be held at St. John the Baptist Church in New Glasgow on June 9, with His Excellency, The Most Reverend Archbishop Brian Dunn officiating.

Donations in memory of Jim can be made to the Aberdeen Health Foundation or a charity of your choice. Arrangements are under the direction of R.H. Porter Funeral Home, New Glasgow.