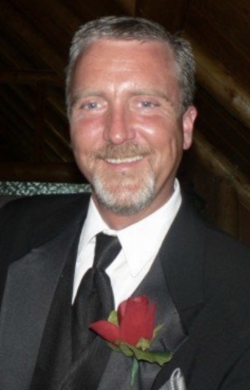 Born in Tracadie, NB, Marc and his family moved for work a few times before settling here in Trenton.

After finishing school, he took on a job at Michelin where he was part of the Michelin family for 35 years and made some very good, lifelong friends.

He had taken on a few names over the years but "Coach" was one of his favorites. This was a team of boys who pulled at his heart strings and his nerves. He never forgot any of them. He loved hockey and was an avid Habs fan ‘til the very end.

He was known for his humour, quick wit and sarcasm but at the same time would do anything for anybody.

He did not like to be idle for too long and was dedicated to the upkeep of his home and his property. He had a passion for cooking and enjoyed preparing his famous BBQ/Smoker dinners. When he did have time to relax, he enjoyed riding his motorcycle and spending time on his newly acquired boat where he was at peace on the water.

He couldn't get enough of the sun, sand, and water and looked forward to the many trips south, with his favourite being Mexico where many friends were made along the way.

He loved the sound that filled the house when his 3 granddaughters and 2 nephews would visit and would cherish each time their arms wrapped around him.

He was proud of many things throughout his life but his sons Michael and Jamie were his pride and joy. He loved them beyond meaning.

Marc loved his family and was close to each and every one. Even from a distance, which many were, you could always feel the love he had for all.

After a lifelong battle of illnesses, Marc leaves behind his wife Dawn (Jenkins); sons: Jamie, Halifax; Michael, Trenton; granddaughters, Lexi, Bella and Addison; father Don, Grand Falls NB; brother, Stephane (Annick); nephews, Maksim and Dominik; mother-in-law, Renie Jenkins. He leaves behind his 2 feline friends, Lily and Lucas who will miss him dearly. But no love was more special to him than his one and only love, Dawn.

Special thanks to Dr. Rafid Al-Nassar and the doctors and nurses at the Aberdeen Hospital for their care.

Visitation 6-8 pm Thursday July 22, in the R.H. Porter Funeral Home, 55 Almont Ave., New Glasgow. Due to current COVID restrictions, those attending the visitation are asked to call the funeral home at 902-752-4122 to pre-register. A private funeral will take place at 10 am Friday, July 23.

The family will receive visitors at their home at 85 Duke Street, Trenton, following the funeral. Donations in his memory may be made to the United Way of Pictou County

Hero: is an ordinary individual who finds the strength to persevere and endure in spite of overwhelming obstacles. He was my Hero. Dawn.