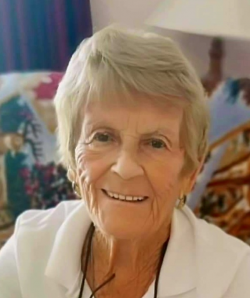 The family of the late Helen Kathleen "Kaye" (MacLean) MacDonald, RN, are deeply saddened to announce her passing on Thursday, December 2, at Glen Haven Manor, New Glasgow, at the age of 94.

Kaye was a devoted wife, mother, sister, aunt and grandmother. She was also an avid Toronto Maple Leaf fan, naming her loyal dog "Kessell". She was married to the late James "Jim" MacDonald for 58 years until his death in 2011.

She graduated from St. Martha’s School of Nursing with her RN diploma in 1947. She spent many years as a nurse working in such places as Alberta, California and Kentucky before she settled in New Glasgow with Jim. She worked in hospitals and did private nursing until she started working with Dr. Williston and Dr. Skinner in their office until her retirement in 1994. She will forever be remembered for her beautiful smile and kindness.

Besides her husband Jim, she was predeceased by brothers, Sonny, Jack and Joe MacLean; sisters, Marion (Frank) Collins and Isabel (Albert) Power. She is survived by sister, Elizabeth "Betty" (Roddy) Flavin; brothers, Donald "Ducky" (Viola); Bob; and Harvey MacLean. She is also survived by many nieces and nephews, many of whom held a special place in her heart.

Our thanks go out to the dedicated staff of Glen Haven Manor for their care and support.

There will be no visitation as per her wishes. Funeral mass 11am Tuesday, December 7, in Saint John the Baptist Roman Catholic Church, New Glasgow, with Fr. Tom MacNeil officiating. Per NS COVID restrictions, all attendees must wear a mask and show proof of full vaccination and valid ID. Burial to take place in Holy Cross Cemetery. Family flowers only. Donations in her memory may be made to the Nick4Mental Health Society. Arrangements are under the direction of R.H. Porter Funeral Home.