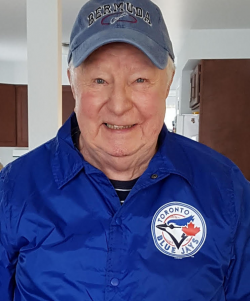 Robert "Bob" Cyril Gardiner, age 90, of Westville, NS, passed away on Friday, January 7, 2022 in the Aberdeen Hospital with his family by his side.

Born in Sydney Mines, he was a son of the late Hector and Clara (McSween) Gardiner. Bob graduated from St. Francis Xavier University in 1957. He worked as an accountant in Ontario and Nova Scotia, and retired from Canada Post in Halifax before returning to Pictou County in 1994 with his loving wife. Bob was a member of the Christ the King Parish in Trenton for many years. He enjoyed his involvement with both Christ the King and Inter Parish choirs. He was also a member of the Knights of Columbus. Bob was an avid sports fan, especially baseball and his favourite team, the Toronto Blue Jays. He rooted for them over the decades during the highs and lows.

Bob was a kind, gentle soul loved by many. He was a true Cape Bretoner who was devoted to his faith. He also met many friends at card games which he truly missed in recent years. His grandchildren have many happy memories of "Poppy" including his very funny sayings, quick wit and the warmest hugs.

Funeral mass 11am Friday, July 22, in Saint John the Baptist Roman Catholic Church, New Glasgow, with Fr. Tom MacNeil officiating. Burial in Christ the King Cemetery. The service was recorded. A link to the recording is below. Donations in memory may be made to the Pictou County Food Bank or charity of choice. Arrangements are under the direction of R.H. Porter Funeral Home.