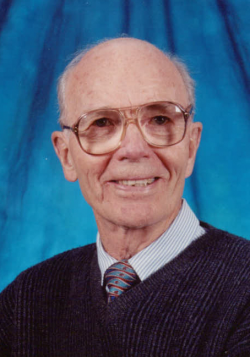 John S. "Jack" Pink, age 98, of The Maples, formerly of New Glasgow, passed away Monday, January 10, 2022 in St. Martha’s Regional Hospital in Antigonish after a short illness.  A son of the late Archibald and Ellen Pink, he was born in Neepawa Manitoba on September 18, 1923.  He received his early education in Neepawa, later earning his Bachelor of Science at the University of Manitoba in Winnipeg.  He worked in various supervisory and management roles in the chemical industry, situated in the Montreal and Hamilton areas, before coming to Nova Scotia with his wife and family in 1969.  In 1971, he joined the Empire Company, working as a real estate appraiser, property tax supervisor, and shopping mall manager. During that time he qualified with the Canadian Appraisal Institute as an Accredited Appraiser (AACI).  After retirement in 1989, he continued to work as a real estate appraiser in the Pictou County area of Nova Scotia, retiring from that work in 1995.  During the time they lived in New Glasgow until they moved to Antigonish in 2019, Jack and Anne traveled extensively across Canada and the United States, and to Germany, Ireland, Scotland, Portugal, Italy and Greece.  He was a member of the New Glasgow Rotary Club for forty-five years, serving terms as president and director, and employing his gardening skills to assist in developing the Rotary Park alongside the East River in downtown New Glasgow.  An active volunteer, Jack served terms as campaign chair and president of the Pictou County United Way, and also as director and past president of the Pictou County Historical Society.  He enjoyed many years as a tennis player and followed the sport closely.  Curling was a lifetime interest, and he played on winning provincial teams several times.  He also helped develop and maintain the sport as founding president of the Belaire Curling Club in St. Hilaire, Quebec, and as a director and president during the rebuilding of the Bluenose Curling Club in New Glasgow in 1992-93.  Jack enjoyed music in many forms and was a member of the Trinitarians community choir for fifteen years, and sang in the Trinity United Church Choir for forty-five years.  He is survived by Anne, his wife of seventy years, and three sons: Dennis (Cathy) in Kitchener Ontario, Gordon in Red Deer Alberta, Alan (Arlene) in Stouffville Ontario, and grandchildren Jenny, Ryan, Greg and Nick.  In his last years, he enjoyed the company of his wife and friends, good food, watching golf and tennis, playing bridge, solving sudoku and crossword puzzles, and working on his computer.  He will be greatly missed and remembered as always being cheerful, eager to share ideas, and never one to complain about his health.  Funeral service, by invitation, will take place 2 pm Monday, January 24, at Trinity United Church. Livestream available on Zoom (https://us02web.zoom.us/j/89064388223) (Meeting ID: 890 6438 8223) or Facebook (https://www.facebook.com/opendoors151). As per NS COVID restrictions, all attendees must wear a mask and show proof of full vaccination and valid ID. Interment in Heatherdale Memorial Gardens.  Family flowers only please.  Memorial gifts may be made to the United Way, Trinity United Church Choir or a charity of choice.  Arrangements are under the direction of R.H. Porter Funeral Home, New Glasgow.