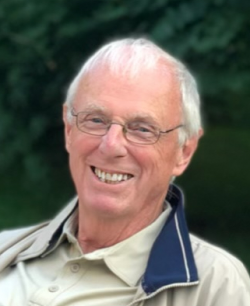 Brian Edward Ross, beloved patriarch of the Ross family, passed away peacefully on January 16th at the Aberdeen Hospital, Palliative Care Unit, after a challenging and most courageous battle with cancer.

Brian was the son of the late Joseph Wiley and Ada (Frost) Ross. He is mourned and will be forever missed by his family and friends after living 84 wonderful years.

Brian was predeceased by his loving wife of 56 years, Doreen (Barry) Ross. He was also predeceased by siblings: William, Joseph, Paul and Marguerite (Theriault); and daughter-in-law, Lynn (Dolmont). Brian is survived by his children, Brian ‘B.J.’ (Cathie Coll), Halifax; Anne (Robert Gaetz), Head of Chezzetcook; Christopher (Fiancée, Mary Alice Berze Butts), Sydney Mines; and Barry (Denine Kumar), Halifax. He was a proud grandfather to his grandchildren: Heather-Alexa, Brian, Olivia (Fiancé Max Randall), Patrick (Fiancé Lawrence Chu) and Tristen. He is also survived by his brother, Greg (Kathryn) Ross and many special nieces, nephews and cousins who will all miss him dearly.

Brian was born in Digby, NS and spent his early childhood years growing up in the beautiful community of Culloden. He moved to Halifax a few years later and attended the Saint Mary’s Boys’ School. It was here, under the direction of the Jesuit teachers, that he developed his love of music. He sang in the school boys’ choir as well as the choir at Saint Mary’s Basilica. He had a deep passion for music that was evident to all who knew him and had an impressive repertoire of songs he loved to reflect upon.

Along with his love of the arts, he also had a great love of sports, in particular the game of basketball. He first picked up a basketball in grade 8 and during his summer vacations in Culloden, he honed his shooting skills. He was a natural athlete and in high school starred on the varsity basketball team at St. Pat’s. He was also involved in student council and musical theatre, showcasing his well-rounded nature and dedication to multiple interests. His hard work and dedication paid off when, in his grade 12 year, he received a scholarship from the church, allowing him to become the first member of his family to attend university.

He enrolled at Saint Mary’s University in 1955 and was a star player on the varsity basketball and football teams. Brian was a gifted athlete who was known for his skill on the hard court and the field, and his dedication to the teams was evident in every game he played. His athletic and academic achievements earned him numerous accolades and awards, including being named Male Athlete of the Year and recipient of the Silver "M" award upon graduation in the spring of 1959.

He was a fierce competitor on the court and his love for the game never wavered, even after his university career came to an end. After graduating from Saint Mary’s, Brian continued to play basketball and was commonly referred to as "Dead Eye Ross" in many Chronicle Herald news articles during that time. He was the captain of the Senior Men’s Halifax Oland Schooners basketball squad and led them to a Canadian senior national championship in 1960. Brian later helped found the Truro Thunderbirds, a team that became known for their competitive spirit and sportsmanship, post-game beers, cigars, and legendary rounds of Trivial Pursuit.

In 2013, Brian was inducted into the Saint Mary’s University Sports Hall of Fame in recognition of his outstanding athletic achievements and contributions to the university's sports program. Brian was a dedicated and talented athlete who continued to inspire and mentor others even after his playing days were over. He will be remembered as a true sportsman and a great leader both on and off the court. Brian was a true Renaissance man and his legacy in both sports and the arts will be remembered for many years to come.

After graduating from Saint Mary’s, Brian joined the Halifax office of the Ford Motor Company where he worked until he acquired his own Ford dealership, Briarwood Ford Sales in Truro in 1973.

As was the case in his earlier years, he continued to volunteer his time by contributing to the Arts, Sports and Business communities, in particular as a founding member of the Truro Sports Heritage Society / Hall of Fame, President of the Truro Chamber of Commerce, President of the Atlantic Canadian Automobile Dealers Association and recipient of the prestigious Time Magazine Automobile Dealer of the Year Award.

In 1986, Brian’s career in the automobile industry then moved on to managing other Ford Dealerships at Vee Eight Motors and Highland Ford Sales in New Glasgow until his retirement in 2006.

After retirement, he continued to stay busy by volunteering his time to causes he believed in, most importantly Kane’s Kitchen. Brian was dedicated to his community and church and was a strong advocate for those in need. His passion for Kane’s Kitchen was unwavering and he will be greatly missed by the organization and all those he helped.

He also continued his insatiable love of reading, watching his favorite sports stars, Tom Brady and Steph Curry and writing with a wit and skill of words even Mark Twain would be envious of.

In his most recent years, he enjoyed spending his days at beautiful Black Point with family and friends. He was an avid gardener and spent countless hours working outside tending to the plants and flowers and he so loved taking his beloved puppy ‘Millie’ for walks along the beach. He took great pleasure in the simple things in life and deeply cherished the time spent with loved ones at the shore.

Brian certainly lived by his favorite motto - ‘carpe diem’ - and he seized each day with positivity and determination. Two of his favorite sayings  were, "If a job’s worth doing, it’s worth doing well" and "When the going gets tough, the tough get going". Words that he lived by and ones that had a profound impact on his children.

His love for life was truly contagious. Despite his medical condition, he faced his challenges with grace and dignity like a true warrior and was an inspiration to those around him.

Brian was always a pleasure to be around, despite his constant complaints about food over the last several years due to his loss of taste from radiation treatments. He managed to maintain his sarcasm and make those around him laugh - and cry - when he would say that his  meals were the "worst he had ever tasted", which coined one of his favorite and frequently used terms, "THAT WAS BRUTAL"!

He was always a character and he will be remembered as a kind, generous gentleman and for his ‘Ross’ sense of humor, his storytelling talent, his love for good books, movies, sports, writing, and entertaining.

However, it will be his unwavering faith, spotless integrity, and beautiful mind and heart that will forever define his character. He will be deeply missed by all who knew him and his memory will live on through the lives he touched and the legacy he leaves behind.

Cremation has taken place. The family would like to invite you to a celebration of life at Immaculate Conception Catholic Church, 669 Prince Street, Truro, on Thursday, January 26 at 11:00 am. Reception to follow in the church hall. Face Masks will be made available to those who wish to wear one.